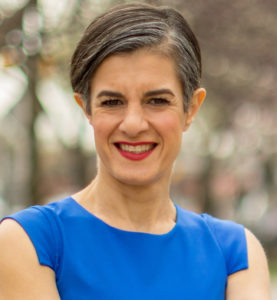 Parisa Dehghani-Tafti is the Commonwealth’s Attorney for Arlington County and the City of Falls Church. Parisa was first elected to a four-year term in November 2019. Parisa comes to the office of Commonwealth’s Attorney with a twenty-year record of criminal justice reform as an innocence protection attorney, a public defender, and a law professor.

As an innocence protection attorney, Parisa served as the Legal Director for the Mid-Atlantic Innocence Project, where she successfully helped exonerate innocent individuals in DC, Virginia, and Maryland incarcerated for crimes they did not commit. She litigated at all levels of state and federal courts, including the United States Supreme Court and the Supreme Court of Virginia. As a public defender with the District of Columbia’s Public Defender Service, Parisa litigated cases of constitutional magnitude and won the first DNA exoneration in DC, which led the FBI to conduct an audit of all of its cases involving hair microscopy evidence; she also represented individual clients in parole proceedings. As a law professor at Georgetown University Law Center and at George Washington University School of Law, Parisa has helped train the next generation of criminal law attorneys, teaching courses on wrongful convictions.

Parisa graduated from the University of California at Berkeley with a BA in philosophy and comparative literature and obtained a JD from New York University School of Law. Prior to law school, she volunteered with the San Francisco Public Defender where she helped the office set up guidelines to identify and place clients eligible for one of the first drug courts in the country into appropriate treatment programs. Parisa’s most formative law school experience was as a student-attorney in NYU’s Capital Defender Clinic, representing death penalty clients with the NAACP Legal Defense and Education Fund. After graduation, Parisa served as a public interest Chesterfield Smith Fellow at Holland and Knight, where she continued to work on those death penalty cases and ultimately helped free Wilbert Rideau from prison after he’d been convicted in trials tainted with racial bias.

Parisa immigrated to the United States with her parents as a young child. She is committed to fair prosecutorial practices that promote both safety and justice, and firmly believes that the measure of safety and the quality of justice we receive should not depend on where we live, who we love, the dollars in our bank accounts, the color of our skin, or which citizenship papers we hold or don’t hold.

Office of the Magistrate

Office of the Commonwealth Attorney

Office of the Sheriff